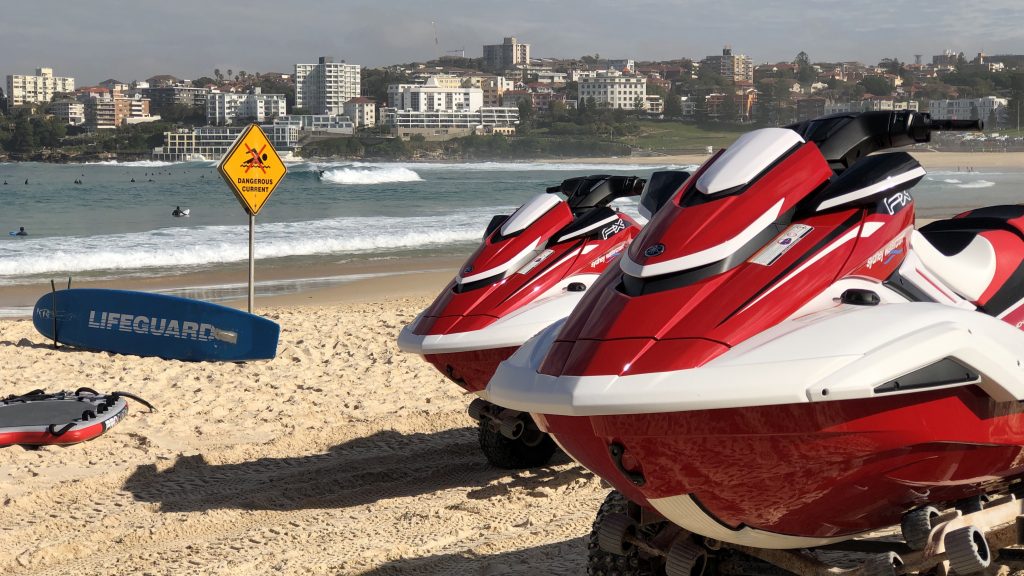 A pair of 2021 Yamaha FX HO WaveRunners has been purchased by Waverley Council to patrol one of the world’s most famous stretches of beach – and the home of the Bondi Rescue reality TV show.

The new models replaced a pair of 2019 Yamaha FX HO WaveRunners that had each clocked up more than 150 hours over the past 18 months and conducted countless rescues.

Bondi Beach lifeguards – some of whom appear on the Bondi Rescue TV show – have been using Jet Skis and personal watercraft to save struggling swimmers since 1997, using Yamahas for the past decade. 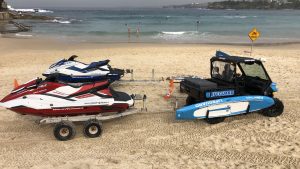 The lifeguards at Bondi Beach save between 50 and 100 swimmers each day during summer, but the record stands at about 230 rescues, says Waverley Lifeguard Manager, Matt du Plessis.

Lifeguards have a choice of paddleboards or Jet Skis to save struggling swimmers, though the WaveRunners are used primarily to assist people at risk of drowning a long way out from the shore. 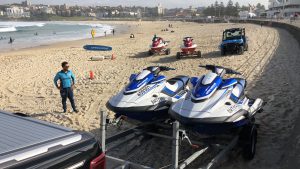 “One lifeguard on a Jet Ski can save us from having to put multiple lifeguards in the water on rescue boards.

“One Jet Ski can cover two or three rips (a path of water that has a strong current towards the ocean, rather than towards the shore) and we can radio to the Jet Ski where they need to go to pull someone out of a rip, or grab someone who’s struggling in the water.”

All lifeguards at Bondi Beach are licenced to operate a personal watercraft. 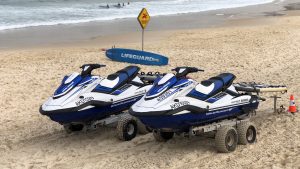 As for getting the Jet Ski off the beach and out through the whitewater to perform a rescue, du Plessis says it’s a matter of timing.

“You can punch through a pretty big whitewater with the power the Jet Skis have these days, so it’s just matter of timing,” says du Plessis.

“If the wave’s too big, you just circle back towards the shoreline and then usually find a gap. We train on the job for that. It’s just a matter of practice. As lifeguards you understand how to read the surf.” 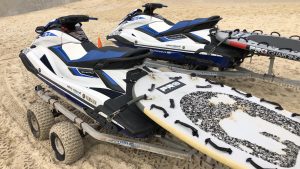 To limit the number of times lifeguards need to battle the surf on a Jet Ski, one craft will stay on the water on busy days and the second craft will be on standby ready to go.

“Sometimes we’ll send one of the Jet Skis around to Bronte or Tamarama (two popular beaches south of Bondi) when they need help there,” says du Plessis. 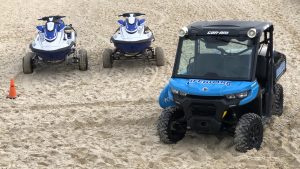 The Bondi lifeguards have perfected rescue techniques using Jet Skis over the years.

The sleds strapped to the back of each craft – and the reverse trigger introduced on Yamaha WaveRunners circa 2015 – give rescuers the manoeuvrability they need to perform a risk-free rescue.

“When we need to get someone who is struggling out of the water, we just reverse towards them with the foam board, they grab onto it and we’re away,” says du Plessis. 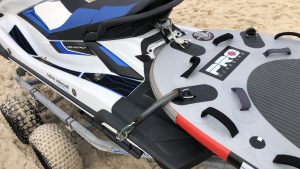 “Previously, we used to have to lean down and grab a swimmer with our left arm, but the guards could injure their shoulders trying grab people out of the water. Now we reverse the Jet Ski and position the mat in front of the struggling swimmer.”

Once delivered to Bondi Beach – 10km east of the Sydney CBD – the Jet Skis never leave until they reach retirement. The watercraft are serviced on site at the lifeguard base and are fuelled by jerry cans after one of the crew makes a trip to a nearby petrol station.

“On a busy day when we’ve been on the water for six hours, we might go through a tank or more,” says du Plessis. 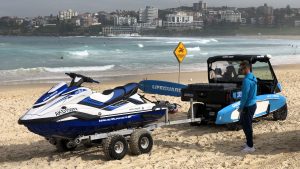 Apart from flushing each craft with fresh water after each day of use, the biggest maintenance issue is protecting the hulls from beach landings.

Contrary to perception, Jet Skis and personal watercraft are not designed to be “beached,” but lifeguards need to do so regularly, which can wear the hull material.

A wide rubber keel guard (seen in the photo below) is glued to the spine of the hull, which minimises damage and prolongs the life of the watercraft. 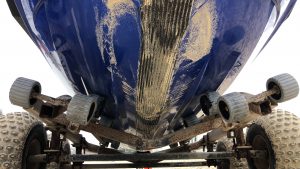 “Sliding the Jet Ski up onto the shoreline can prematurely wear the hull, but we have a better system now with keel guards,” says du Plessis.

However, it’s worth noting keel guards are not recommended for use at high speed as they can adversely affect handling. They suit the needs of lifeguards because the craft are rarely operated at high speed.

For anyone considering launching a Jet Ski at Bondi beach – other than the lifeguards – be warned. 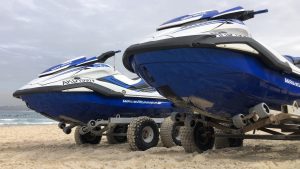 Jet Skis are not allowed on Bondi Beach because recreational users must be at least 500 metres away from the yellow and red swimming flags, and maintain a distance of 60 metres from anyone in the water, including surfers out past the breakers.

The Bondi Rescue reality TV show has filmed 16 seasons to date. To document the series, camera crews are based at the beach seven days a week during the peak summer period. 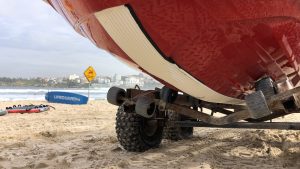 “The show has helped highlight some of the dangers people face when heading down to the beach,” says du Plessis.

“During our busy times, we have up to 30 lifeguards working the 14-day roster system to ensure we have 13 hours a day coverage at all three beaches.” 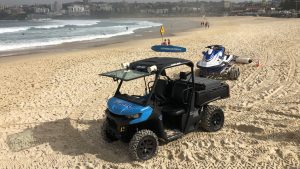 “If you’re swimming, stay between the red and yellow flags. If you get into trouble, try to float.”

The Bondi lifeguard manager adds: “If you get taken by a rip, if you float and don’t try to swim against it, you’re a good chance of getting out unharmed.” 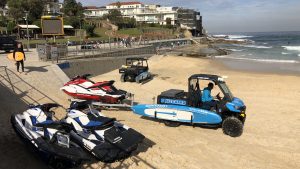 A lot of swimmers who try to swim against rips end up drowning because they become exhausted.

“Our advice is plan ahead before you go to the beach,” says du Plessis.

“Make the right choice and swim at a patrolled beach, speak to the lifeguards if you are unsure about the conditions, and swim between the flags,” says du Plessis.

“If you find yourself caught in a rip, try to stay calm, remember to float, and call for help.”