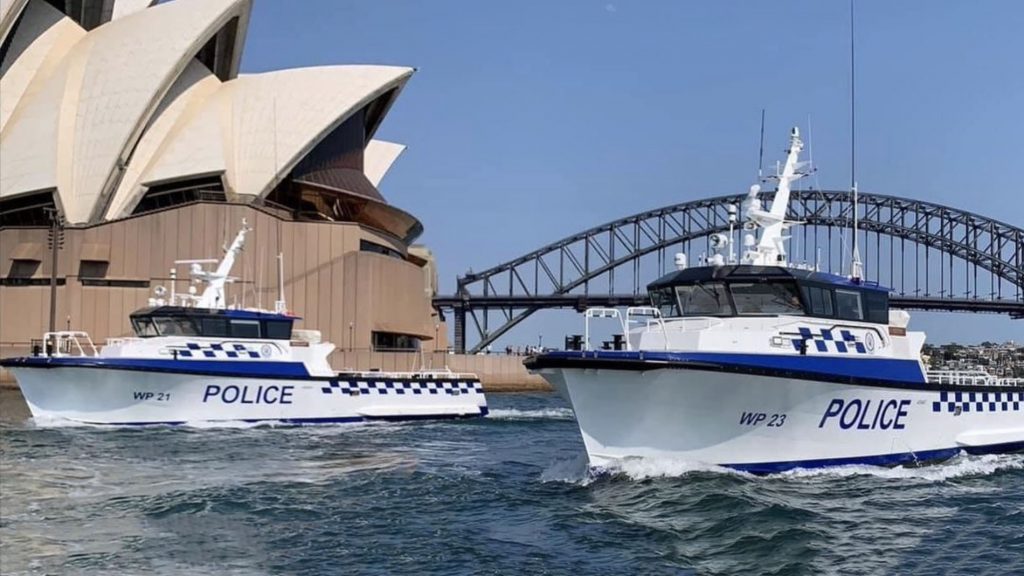 Authorities and government officials have come under fire after targeting riders of Jet Skis and personal watercraft during recent high visibility enforcement campaigns after statistics show boaties – not PWC riders – are more at risk of death on the water.

There was outrage in February 2021 when, during a press conference with television media in the lead-up to a weekend of enforcement, the NSW minister for transport, Andrew Constance, told reporters: “This weekend we need everyone to cool their jets.”

In a separate sound bite later in the television media conference, Mr Constance, flanked by a Maritime official (pictured below), told reporters: “We’ve seen a dozen people lose their lives over the last 12 months on the state’s waters.” 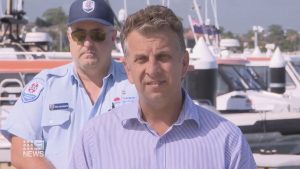 This statement – broadcast on the top-rating Channel Nine News alongside data that highlighted a 90 per cent increase in PWC licence holders in NSW during COVID-19 travel restrictions (from May 2020 to February 2021) – incorrectly implied those “dozen” deaths were riders of Jet Skis or personal watercraft.

Exclusive research by Watercraft Zone has revealed this was either an exaggerated or inaccurate number, and it appears the figure was for boaties rather than PWC riders.

Data supplied by the NSW Government to Watercraft Zone since the news bulletin was broadcast has revealed there was a total of five deaths of PWC riders from 2016 to 2020 in NSW, versus 54 boaties over the same period – and a number of PWC deaths involved unlicensed riders and / or riders who were not wearing a mandatory buoyancy vest. 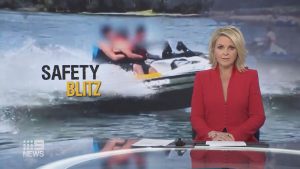 Above: How the enforcement campaign appeared on Channel Nine.

Meanwhile, in Victoria, there were zero deaths of PWC riders reported over the five-year period from 2016 to 2020, versus 34 fatalities on boats.

However, a study in 2016 by Transport Safety Victoria found PWC riders sustain “a higher rate of serious injuries.” 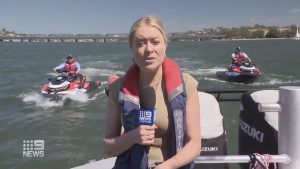 Above: How the enforcement campaign appeared on Channel Nine.

Watercraft Zone focused on data from NSW, Queensland, and Victoria as they are the three most populous states in Australia and have the highest number of licence holders and registered PWC vessels across the nation.

The statistics show that, even when the number of fatalities are compared to the number of licence holders for each type of vessel, boaties are still over-represented in fatalities on our waterways, versus PWC riders. 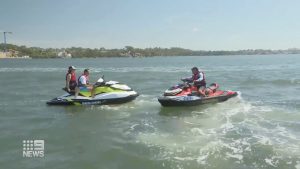 Above: A couple riding two-up are stopped in front of TV cameras for a routine check and are cleared. We have obscured the Sea-Doo’s registration to protect the owner’s privacy.

While Victoria recorded no deaths of PWC riders over this period, 34 deaths of boaties represented 0.008pc of boat licence holders.

Key figures in the boating and PWC industry believe government officials have embarked on media campaigns designed to appeal to the broader public, rather than directly address the safety issues on the water. 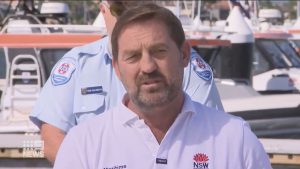 Announcing a “zero-tolerance” crackdown over the last weekend in summer, Transport for NSW Acting Chief Operations Officer, Mark Hutchings (pictured above), told Channel Nine News: “This isn’t really a warning today, this is a promise. What happens when the sun comes out – the guns come out. Jet Skis are everywhere.”

In response, the boating industry has called on all waterway users to obey the laws and ride safely – especially near swimming areas and boat ramps – amid increasing concerns about authorities demonising all riders of Jet Skis and personal watercraft.

“There is definitely a perception issue,” said Neil Patchett, the spokesperson for the Boating Industry Association (BIA). “The public believe personal watercraft are more dangerous because of the way they’ve been portrayed in the media for decades, and in the way regulators tend to single them out.” 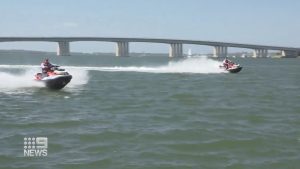 Above: NSW Maritime officers on patrol, as shown by Channel Nine.

Mr Patchett said the general public had opinions about personal watercraft that “tend to be emotive”.

“You don’t have to be a boater to have an opinion about the waterway,” said Mr Patchett. “The general public – who might be residents by a waterway, beachgoers, or holiday makers – they all have a view about what should be happening out on the waterway.”

As for the use of exaggerated fatal statistics in media campaigns by government officials, the BIA representative told Watercraft Zone:  “I don’t think it’s about fatal statistics, it’s about cracking down on the minority who do the wrong thing. They’re the ones who are spoiling the sport for all of us, and fuelling the perception of personal watercraft.”

Exaggerated or inaccurate fatal statistics “shouldn’t be used as a trigger for … regulations and compliance and the approach to a particular type of watercraft,” said Mr Patchett.

The Boating Industry of Australia representative said regulators “generally factor in the complaints that they get through to their phone lines as a significant piece of information to inform their counter measures, and quite often those can be biased.” 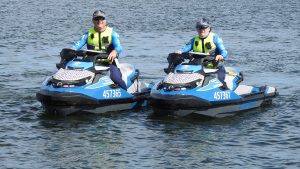 “Regulators need to be encouraged to look at the total picture, and that includes fatalities, serious injuries, near misses, and also feedback from the community, and develop an appropriate response to that,” said Mr Patchett.

“Governments tend to pick on personal watercraft because they are highly visible and quite often operating close to a recreation area where there are people on the waterfront,” said Mr Patchett.

“And if you’ve got boats or watercraft displaying poor behaviour or being irresponsible, the public are going to say ‘well that’s not right’. If it’s perceived to be dangerous or aggressive then the public get elevated, and that’s part of the perception driver.” 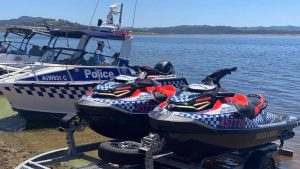 However, the Boating Industry Association said it also has zero tolerance for anyone on the waterway who operates a craft dangerously or flouts the law, especially in speed zones around swimmers and boat ramps – and in “no wash” zones in national parks or near marinas.

“Authorities are right to crack down on the minority of people on the waterways – boaties and PWC riders – who flout and ignore the rules,” said Mr Patchett.

“Crack down on them … but don’t bring the burden of that and the cost of that across to the vast majority who are doing the right thing on the water and who just want to use a personal watercraft for all the benefits that it brings.” 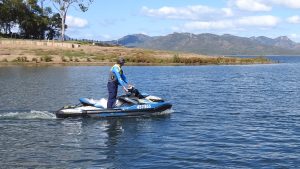 Above: A Maritime Safety Queensland officer on patrol during an earlier safety campaign: Source: MSQ.

A statement from Maritime Safety Queensland said PWC registrations in south-east Queensland grew by “a staggering 40 per cent” in the second half of 2020 due to International travel restrictions amid the pandemic .

“With the increasing popularity of personal watercraft comes a greater need for them to be operated responsibly,” the MSQ statement continued.

“Most PWC riders comply with the regulations but maritime compliance officers continue to see too many instances where they don’t. If you’re on a jet ski – or any other craft – operate at safe speeds, always keep a proper lookout, and keep well clear of other craft and swimmers.”

Fatal statistics: Boaties versus Jet Ski and PWC riders (and as a percentage of licence holders)

Source: Marine safety authorities in NSW, Queensland and Victoria. Other states and territories not compiled.