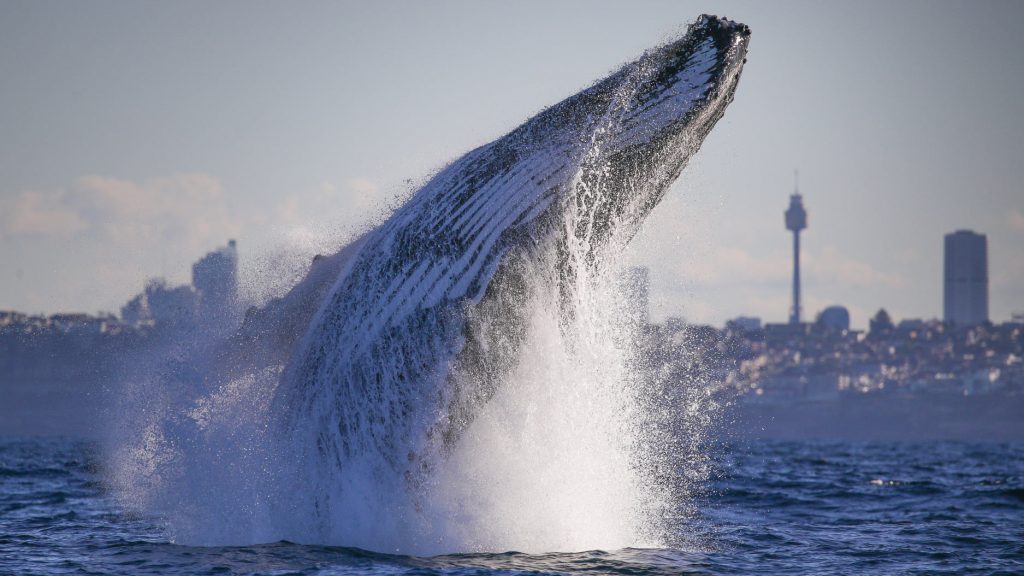 Jet Skis must remain 300 metres away from whales and dolphins along the east coast of Australia, or risk fines ranging from $689 to $16,500.

With whale watching season occurring between April and November, authorities in Queensland, NSW and Victoria have issued reminders to boaters and Jet Ski riders to maintain safe distances. 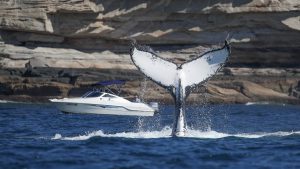 In most jurisdictions, if a whale or dolphin surfaces alongside your Jet Ski or personal watercraft, you’re obliged to move away slowly and carefully.

In Queensland if a dolphin begins to porpoise in the wash caused by your craft, you can continue on your way as long as any change in speed or direction is made gradually “in a way that is unlikely to disturb the dolphin, particularly if it is bow riding.”

However, the consistent advice across all three jurisdictions is that Jet Skis and boats are not allowed to approach whales or dolphins.

And it is also illegal to position your craft in such a way that would cause whales and dolphins to travel close by. 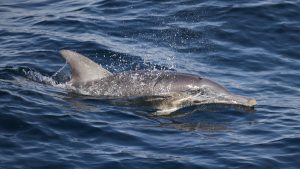 The fine for breaching minimum distances to whales and dolphins ranges from a $689 on the spot fine, to court imposed penalties of up to $16,500, depending on the jurisdiction.

Here are the regulations along the east coast of Australia, heading north to south.

In Queensland, the areas around whales and dolphins are divided into caution zones and no approach zones (see illustrations below).

A caution zone is an area alongside a whale or dolphin in their direction of travel.

No approach zones are in front of or behind a whale or dolphin in their direction of travel. 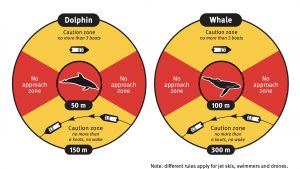 In Queensland, Jet Skis and personal watercraft are considered “prohibited vessels” and cannot be operated within 300 metres of a whale or dolphin in any direction.

Authorities in Queensland told Watercraft Zone a penalty infringement notice can be issued by an authorised officer under the Nature Conservation Act, which includes Queensland Parks and Wildlife Service Rangers, Queensland Police, as well as Queensland Boating and Fisheries Officers.

Jet Ski riders and boaters who breach minimum distances from whales and dolphins in Queensland risk a $689 on the spot fine, or up to $16,500 in penalties if authorities take the matter to court. Peak season for whales in Queensland waters is between May and October.

“Whales will start to travel north along the Queensland coast in May, with the peak starting in June,” say Queensland authorities.

“They will start heading south from about August. Juveniles and males first, and then mothers with calfs and companions. Peak season for whales is usually over by the end of October,” say Queensland authorities. 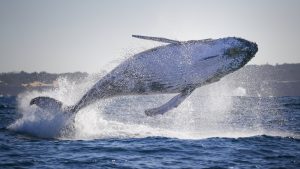 Queensland authorities say boaties and Jet Ski riders who get too close to a whale “are putting themselves in harm’s way, as humpbacks have the ability to breach over the top of a vessel”.

“An adult humpback can weigh about 40 tonnes and potentially cause serious injuries to a human if they get too close,” say Queensland authorities, who expect close to 40,000 whales to travel along the coast each year. 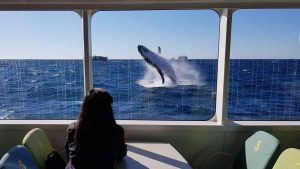 Furthermore, fixed-wing planes are not allowed within 300 metres of a whale or a dolphin in Queensland, while camera drones must be at least 100 metres away.

Helicopters are not allowed within 500 metres of a whale or a dolphin, and are not permitted to hover above a marine mammal.

“If a whale approaches a boat so that the boat is within the caution zone, the boat must not operate at a speed more than six knots (12 km/h) or at a speed that creates a wake,” say Queensland authorities.

“If a whale approaches a boat so that the boat is within the no approach zone, the operator of the boat must turn its engines off or disengage its gears, or withdraw from the no approach zone at a speed that is less than six knots (12 km/h) and doesn’t create a wake,” the advice from Queensland authorities continues. 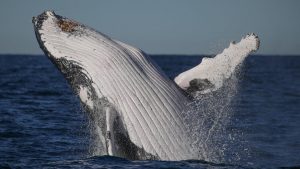 However, if a dolphin approaches a boat within the caution zone or the no approach zone, “a moving boat can continue on its way as long as any change in speed or direction is made gradually in a way that is unlikely to disturb the dolphin, particularly if it is bow riding,” say Queensland authorities.

In addition to the above restrictions, boats and Jet Skis are not allowed within 500 metres of predominantly white whales. Check the Queensland Government website for details.

Queensland authorities also advise “never drive a boat (or Jet Ski) into a pod or herd of marine mammals causing it to divide into smaller groups”. 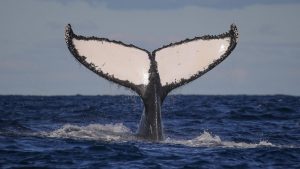 “Do not deposit rubbish near, make a loud or sudden noise near, or attempt to touch or feed a marine mammal, unless it is part of an authorised dolphin feeding program,” say Queensland authorities.

You can notify Queensland authorities about sick, injured, or dead marine mammals by phoning 1300 130 372.

In NSW, Jet Skis must remain at least 300 metres away from whales, dolphins and dugongs.

The fine for Jet Ski riders and boaters who breach minimum distances from whales, dolphins and dugongs in NSW is a $1320 on the spot penalty notice (or a $3300 fine if the offence is committed in the course of a commercial operation).

“NSW National Parks and Wildlife Service (NPWS) and NSW Police have the authority to issue fines for breaches to the regulation,” authorities advised Watercraft Zone. 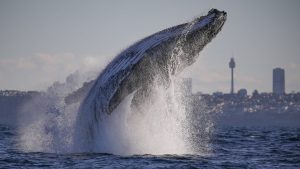 “If there are predominantly white whales, all vessels, including Jet Skis and personal watercraft, must keep a distance of 500 metres,” say NSW authorities.

NSW also has caution zones and no approach zones when it comes to maintaining minimum distances from whales and dolphins (see illustrations below). 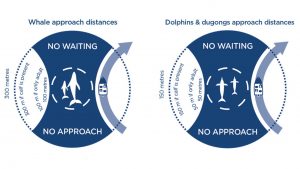 As is the case in Queensland, in NSW waters Jet Skis and personal watercraft must stay further away than boats from whales and dolphins.

“NPWS also enforces compliance through education and awareness programs that highlight the risk to both whales and Jet Ski riders when they get too close,” NSW authorities told Watercraft Zone.

Humpback whales tend to start their migration around April and May from Antarctic waters, heading to the warmer waters off Queensland each year. 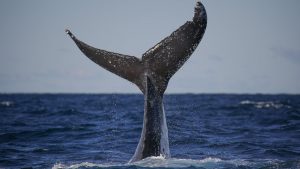 “NPWS anticipates more than 40,000 whales will migrate through NSW waters this year, with numbers tending to peak during July. Humpbacks are seen returning to Antarctica from July with the very last ones heading south around October.”

Boats in the caution zone are recommended to not travel faster than six knots (12 km/h) or at speeds that create wake, and are advised to create “minimum wash”. 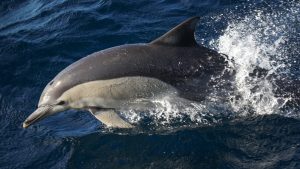 Meanwhile, the NSW Government advises that all vessels – including Jet Skis and personal watercraft – must maintain a distance of at least 10 metres from seals and sea lions (80 metres if there are pups).

When approaching whales, dolphins or dugongs, NSW authorities advise boaters to maintain minimum distances and “approach at an angle of at least 30 degrees to their direction of travel.”

“This helps you avoid cutting across their path or putting your vessel directly in front of or behind them,” say NSW authorities. 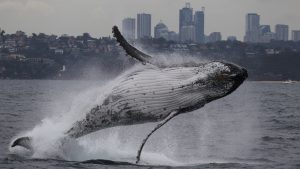 “If there are other vessels approaching, wait your turn. No more than two vessels should approach at a time,” the NSW Government website says.

If a whale or dolphin approach your vessel “stop or slow down to minimise your wash, move away or disengage your vessel’s gears, avoid making any sudden movement, and minimise noise,” says the NSW Government.

You can notify NSW authorities about sick, injured, or dead marine mammals by phoning 1300 072 757. 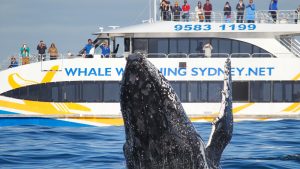 “Breaching these rules could result in a maximum penalty of $3620 under the Wildlife Marine Mammals Regulations in the Wildlife Act 1975,” authorities in Victoria advised Watercraft Zone. 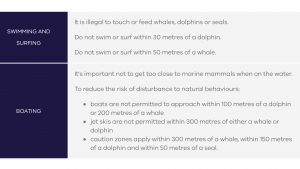 “While humpback whale sightings can occur year-round, there are two peak seasons – April to June when they migrate north, and September to November during their southern migration,” say Victoria authorities.

Anyone who sees a Jet Ski rider or boater breaching minimum distances can report the incident to Crime Stoppers Victoria on 1800 333 000. 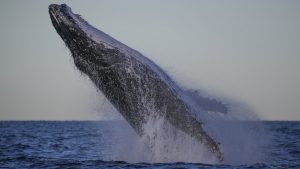 In Victoria, all aircraft (including fixed-wing planes, helicopters, and camera drones) must not approach a whale, dolphin, or seal within 500 vertical metres or within a 500 metre radius.

Authorities in Victoria also advise aircraft to “avoid approaching marine mammals from head-on, avoid flying over, or passing the shadow of the aircraft over, marine mammals.”

In Victoria, licensed marine mammal tour operators using aircraft may approach within 300 vertical metres or within a 300 metre radius of a whale, dolphin, or seal – subject to a range of conditions.

You can notify Victorian authorities about sick, injured, or dead marine mammals by phoning the Melbourne Zoo Marine Response Unit on 1300 245 678.